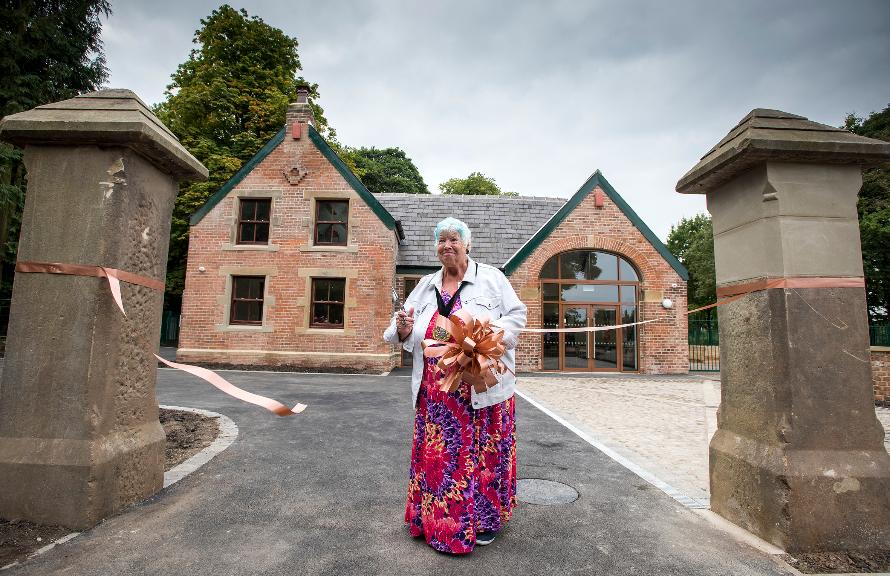 The historic Coach House at Hurst Grange Park has been given a grand official reopening following its long-awaited restoration.

On Saturday (4 September) The Mayor of South Ribble, Cllr Jane Bell, cut the ribbon on the refurbished facility, which has been dramatically transformed from a rundown relic into an attractive visitor centre and events space.

The Coach House was originally built in 1848 and has long outlived the demolished Victorian mansion that gave the Penwortham park its name.

Now, with the aid of significant funding from South Ribble Borough Council and the National Lottery Heritage Fund, it has been brought back into use as a welcoming focal point for park visitors - complete with a new soon-to-open café and public toilets.

The Mayor, who joined other guests for a special guided tour, said: "It's an absolute pleasure to officially reopen the Hurst Grange Park Coach House, which now proudly stands as a fitting centrepiece of the park.

"It's wonderful to see an important part of our local heritage so beautifully restored into a fabulous asset for the whole community. The transformation has been incredible, as I'm sure everyone who visits the park will agree!

"I would like to say a massive congratulations to the two 'Friends' groups, whose passion, enthusiasm and dedication has helped us create something incredibly special for the people of Penwortham. Their efforts have all been worth it!

"I'd also like to thank absolutely everybody who has supported the many fundraising events that have helped to make all this possible. I hope you will all be as delighted with the results as I am."

The Coach House Restoration Project, with the help of the Friends of Hurst Grange Park, was able to provide £17,000 towards the cost of the renovation through a 'Buy a Brick' appeal and a series of fundraising events supported by local businesses.

The registered charity was also instrumental in securing a grant of £513,000 from the National Lottery Heritage Fund. South Ribble Borough Council, who led the bid, has contributed an additional £253,000.

Works have included the removal of the 1960s depot garage extension and the restoration of the original front façade. The roof has been repaired, windows have been replaced and a multi-use space has been designed to host a range of community events and activities.

There is also a new first-floor space plus a kitchen to support the new café, which will be operated by the people behind the popular Folly Café at Leyland's Worden Park. A low-carbon air source heat pump system has been installed and there has been significant insulation of the walls and roof to improve energy efficiency.

The rear of the building has also been transformed with a glazed canopy over the courtyard to allow year-round use.

In addition to the refurbishment of the Coach House itself, a project is underway to relandscape the surrounding external spaces - made possible by a £30,000 grant awarded from the Lancashire Environment Fund.

This includes the restoration of the original cobbled front courtyard, the creation of new paths, planting areas and cycle parking spaces, and the opening of a dementia-friendly wildlife garden.

Designs for the garden areas have been created by Year 6 pupils from the nearby Broad Oak Primary School, who will be returning to assist with planting and the installation of nesting boxes and a bug hotel ready for an official opening in around a month's time.

Meanwhile, the dementia-friendly wildlife garden will be watered using an old well uncovered during the early stages of the project and brought back to life.

Councillor Matthew Tomlinson, Cabinet Member for Finance, Property and Assets at South Ribble Borough Council, said: "This moment has been years in the making but, boy, has it been worth the wait!

"The results of the restoration work are truly stunning and we now have a remarkable facility that celebrates our heritage while providing a flexible modern venue capable of staging a whole host of community events.

"Hurst Grange is a beautiful park visited by thousands of people all year round and I'm absolutely delighted that with the restoration of this historic Coach House, following on from the recent refurbishment of the playground and with further improvements to the park in the pipeline, we are making the park an ever more attractive and welcoming place for all the family.

"This really is a proud day for the Council and for the 'Friends' groups, who have worked alongside us to make this ambitious project a reality."

The Friends of Hurst Grange Park Coach House Restoration Project was established in 2014 with the goal of reviving the long-standing local landmark. In 2016, the charity was awarded a Resilience Grant of £15,000 from the National Lottery Heritage Fund to carry out a study into the viability of the project.

Bamber Bridge-based consultants Taylor Armitt were engaged to conduct an extensive survey of local residents and park users, and from this a number of options were drawn up and presented at a two-day exhibition - with members of the public invited to vote for their preferred option.

John Fazakerley, Chairman of the Hurst Grange Park Coach House Restoration Project, said: "For too long this forlorn and dilapidated building has been a blot on the landscape of Hurst Grange Park and now it is set to be the jewel in its crown!

"South Ribble Borough Council is to be congratulated on its bold initiative to support this project, and I would like to thank everybody involved in making this day possible - including the Friends of Hurst Grange Park for their help with organising fundraising events and engaging with the public.

"I would also like to thank the people of Penwortham and further afield who have supported our events, along with all those local businesses who have given us their backing. Together, we should all be proud of what we've achieved."

Anybody interested in booking the new Coach House for an event or function can email hurstgrangecafe@outlook.com.