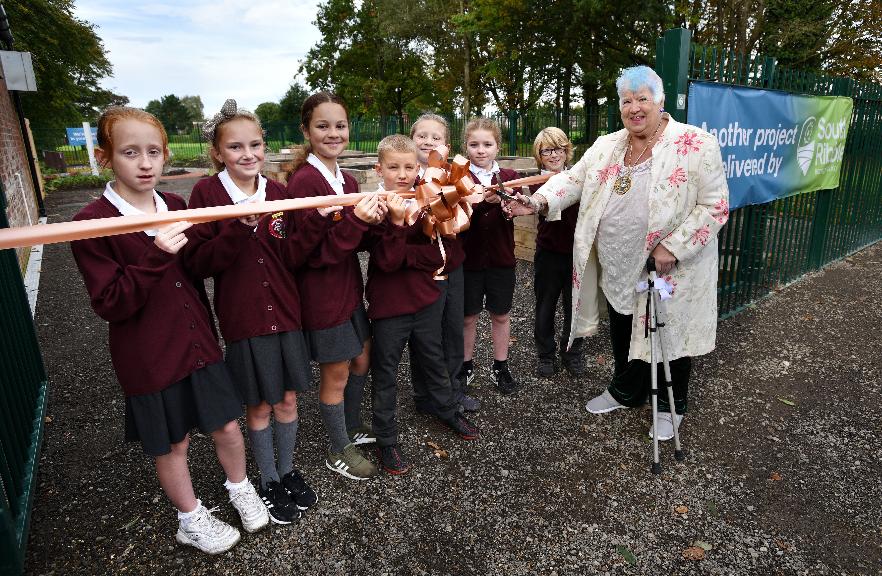 It was a special moment for Year 6 pupils from nearby Broad Oak Primary School, who played a major role in designing and planting the area and were invited along to see the finished results. Their involvement is also to be commemorated with a special plaque.

The garden forms part of a wider project of landscaping improvements outside the freshly-renovated Coach House building - assisted by a £30,000 grant from the Lancashire Environmental Fund.

The original cobbled front courtyard of the historic landmark has also been restored while new paths have been created along with bike parking spaces for cyclists.

The garden itself features a variety of nectar rich plants for pollinators such as bees, moths and butterflies, as well as a bee nesting tower and a bug hotel to encourage other insects.

The Mayor of South Ribble, Cllr Jane Bell, said: "It's an absolute pleasure to officially open this wonderful new dementia-friendly wildlife garden. I'm sure everyone will agree that it looks fabulous and the children should be incredibly proud of all the brilliant work they have done. What a fantastic achievement!

"Dementia awareness and support is a cause close to my heart, so I'm delighted this new garden has been designed to be accessible and welcoming to people living with dementia.

"I know walking through a bright and colourful garden such as this always lifts my spirits and I imagine many, many residents will feel exactly the same, so this really is a super asset for the whole community."

Dementia-friendly gardens are designed to offer comfort and stimulation to those living with dementia. They are quiet and restful spaces incorporating a range of colours, provided not just by plants and flowers but also sculptures and path surfaces. There is level access throughout and the garden is also enclosed by protective railings.

To reflect the rich heritage of the Coach House, paths have been designed in the shape of a horseshoe while there are also horseshoe-themed sculptures on show as well as wildlife-themed games for children to play.

Plants will be watered using an old well uncovered during the early stages of the project and brought back to life with the installation of a new pump donated by Peter and Dorinda Hulton, descendants of the owners of the original Hurst Grange estate.

The garden's completion comes just a month on from the grand opening of the Coach House itself, which has been dramatically transformed with the help of significant funding from South Ribble Borough Council and the National Lottery Heritage Fund. Some £513,000 in Lottery funding was secured, with the Council contributing an additional £253,000.

A further £17,000 was raised by the Friends of Hurst Grange Park Restoration Project, who were also in attendance at today's official opening along with representatives of the Lancashire Environmental Fund.

Formerly a rundown relic dating to 1848, the Coach House is now an attractive visitor centre and events space complete with public toilets and a new café, which has also now opened its doors to customers.

Cllr Matthew Tomlinson, Cabinet Member for Finance, Property and Assets at South Ribble Borough Council, said: "We're really proud of what we've achieved with the Hurst Grange Park Coach House and now, with the opening of this fantastic dementia-friendly wildlife garden, it's looking even better!

"As a Council, we're committed to making the most of our wonderful local parks and providing attractive spaces in which local people and families can relax and enjoy themselves.

"We're also proud that South Ribble is officially recognised as a dementia friendly borough and we hope the creation of this new garden provides a real boost to the health and wellbeing of local people living with dementia.

"Our thanks go to Lancashire Environmental Fund for their tremendous support, the Friends of Hurst Grange Park Restoration Project for their ongoing passion and commitment, and the local contractors who have helped us deliver this marvellous project.

"Last but certainly not least, I'd like to say a massive thank you to the brilliant pupils from Broad Oak Primary School who have helped us create something really special for our community."

Hurst Grange Coach House is available for hire for a wide variety of events and functions. Anybody interested in booking the venue can email hurstgrangecafe@outlook.com.