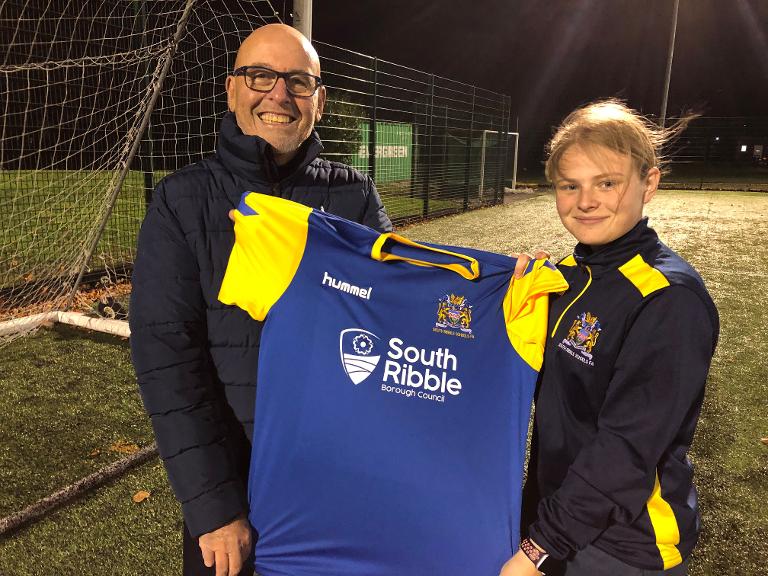 South Ribble schools' new Under 15s girls squad are ready to kick-off their first ever season this week after being provided with kit by the Council.

Deputy Leader Cllr Mick Titherington presented the smart-looking navy and yellow strips to the team at a training session at Balshaw's C of E High School in Leyland on Friday (26 November).

The jerseys, shorts and socks - enough for 16 outfield players plus a goalkeeper - have been donated as part of a commitment to growing girls' and women's football across the borough.

South Ribble Borough Council is playing an active role in the Girls' Football Schools Partnership, targeting equal access to schools football for every girl in England by 2024.

Through the #LetGirlsPlay campaign, The FA and its partners aim to change perceptions and show football can and should be played by girls. South Ribble's Active Schools team is working to get as many local schools as possible involved and signed up for development training and resources.

The Council also recently linked with Leyland-born freestyle football world champion and official Football Foundation ambassador Liv Cooke to promote participation among girls ahead of the opening of the new South Ribble Playing Pitch Hub in the spring.

Cllr Mick Titherington, who is also Cabinet Member for Health and Wellbeing, said: "As a Council, we're really passionate about ensuring everybody has the opportunity to play and enjoy sport.

"That's why we're currently investing in facilities across the borough, including the new £2.6m Playing Pitch Hub in Bamber Bridge, and why we're working as part of The FA Girls' Football Schools Partnership to give local girls the same access to football as boys.

"With England set to host the UEFA Women's Euro 2022 tournament next summer, there's no better time to be encouraging more women and girls to take up the beautiful game.

"Football is for everyone, and who knows... we could have the next Steph Houghton, Ellen White or Lucy Bronze right here in South Ribble! More importantly though, we simply want all girls to be given the chance to participate, get active and have fun.

"The girls will look absolutely fantastic in their new kit and I wish them all the best for the season ahead."

A squad of 20 top talents from across South Ribble has been compiled following a series of trials. Led by coach Olivia Black, the girls get their campaign underway this Friday evening when they face Knowsley & St Helens away from home.

South Ribble SFA Organiser Mark Winnard said: "Olivia and the squad are absolutely thrilled with their brand new kit kindly donated by South Ribble Borough Council and will wear it with pride in their inaugural Lancashire League campaign.

"Our thanks to South Ribble Borough Council and their Active Schools coaches for this much-needed support."

To find out more about the #LetGirlsPlay campaign visit englandfootball.com/letgirlsplay.